It's origami and a hand cannon 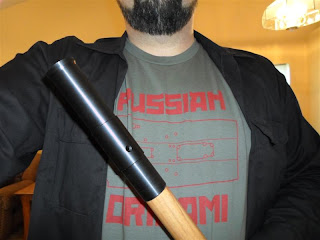 The T-shirt is Linoge's  Russian Origami  that just came in today.  Very sharp. Order yours today.
Supplies are limited.  Seriously, they are.

The cannon on a stick is... well exactly that.  It's a 50 caliber handgonne courtesy of Speer.  It was a custom order but he's made them before.  As JayG will attest.   And it is a seriously awesome and very fun weapon.

I've already got a flintlock and a blackpowder mortar so I had all the kit in hand. 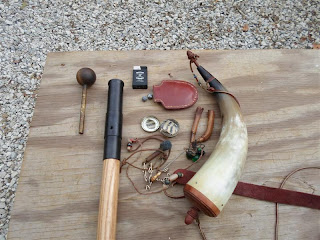 (Not pictured: fuse.  Which is a story for another day)

Very fun.  There's something about a gun that has no moving parts.  I have some video I shot at the range.  Not sure if I should go with the one where I have my back to the camera (obscuring the cannon)  or the one where you can see the handgonne but the fireball isn't as good.

Also as a bonus Speer packaged some thing extra in with my order. 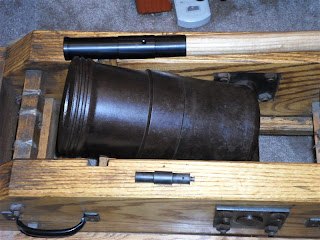 It's the little tube on the bottom rail.

Yes, it's a 22 caliber  key-chain cannon.  I don't have the shot to fire it yet but hope too soon.
And how funny is it that my biggest and smallest guns are both single blocks of steel that you light by sticking in fuses? 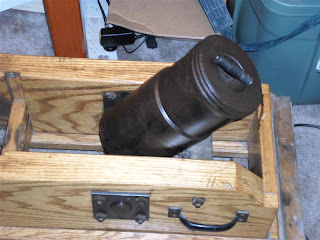 Here's another picture for scale against my mortar.  The above link has some close in shots of it.

So that's two merchants I've had more than satisfactory business with.

Update:  Thanks for the link Linoge!  And here's an updated post with the shirt at a blogmeet and some video of the handgonne in action.

Win! First one I have seen in the wild. Thanks for the business :).

Also, I am rather envious of that handcannon...

Where did you get the mortar? And BTW the sirt looks snazzy :o)

I bought the mortar itself oh... eleven years ago at a French and Indian War reenactor "Rendevouz" at the Yates County Sportsman's Association up in the Southern Tier.

The wooden frame it rests in I built with my father as a project shortly after picking up the mortar.

I'm sorry to say but I don't remember who I bought it from.

Man does the time fly.

I can only really narrow down the date because I know for a fact I didn't have it at the 1999-2000 new years. I'd have remembered calling in the new year with that.

Ahh I had a chance to buy a small "Candy" Mortar at the Des Marie Faire but didn't have the cash on me. Always on the lookout for a decent small mortar.

Yeah, it was a similar case with this one.

I vacillated on whether or not I should buy it, but realized I might not have another chance.

But speaking on that, I just head from Speer that they might be able to build some mortars in the next year.