The SAF is promoting the 19th as National Gun Appreciation Day.

It's not a bad idea. But it's limited. As Sebastian points out.


The second concern, and perhaps the greater concern reflects something I heard last night on Cam & Company. In his weekly roundtable with Mike McCarville. Cam was getting feedback from Mike about what gun show attendees were thinking and doing, in terms of whether they were writing their lawmakers and making their voice heard. The unfortunate response was that many of them felt very strongly that by going to the gun show, or by buying guns and some ammunition, they were making a statement. Folks, if this belief becomes widespread, we’re going to lose. Communicating with lawmakers is crucial at a time like this. Last night I got a call from NRA’s lobbyist in Illinois, and he mentioned that everyone’s phone calls, faxes, and e-mails were absolutely crucial to helping defeat those bills (for now). If we can’t repeat that play everywhere else in the country we are screwed.

Yes we gunnies need to do something. We need to do our duties as ambassadors to our friends and families and co workers.

But Sebastian is right, you know what has stalled the anti's efforts, for now, in Illinois? Here's a hint, it wasn't a mass buying of guns.

Contacting your reps is EASY. If you're willing to spend the money on a gun and spend the time waiting in line for a gun show, then you should be willing to contact your congresscritters.

What will I be doing on National Gun Appreciation Day? Well that's the day of the Indy1500 gun show.

I'll be there handing out fliers. Again, it can't hurt and I'd be at the show anyway. Here's a first draft. 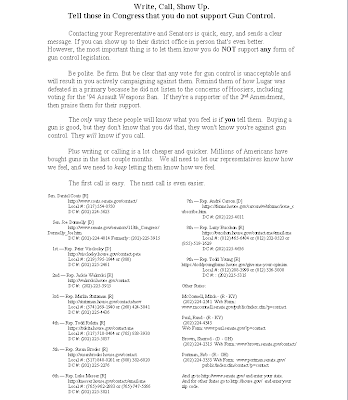