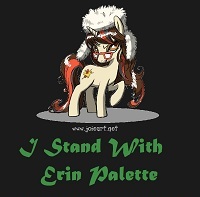 Most of you have probably already learned of Erin's secret.
If not it's best you can learn it from her yourself.
I believe I first met her from her comments at Weerd's and then followed her back to her blog where I learned about her interest in guns, ponies, and RPGs.  I've gammed with her, shot with her, and helped her with dev work.


I'll have to join Michael in saying that this secret was "not all that big a secret". Not to me it was. Erin did not change in my eyes.  Not when I met her, she played with my dog, not when we shared a hotel room, not when we went shooting.

That in no way diminishes Erin's fear or her challenges. Her fears are legitimate and society does not look kindly on those of us who are different.  But we're gunnies.  There's also her own struggles with the face that looks back at her in the mirror is not her own.

We're know what it is like for the self righteous to react with fear and horror. The situation is different, but maybe this will bring some measure of perspective.

I remember the strength and bravery Erin took to drive halfway across the country to the Bidet shoot to visit myself, Wenthe, Oddball and others for the first time. And it worked. She took a tremendous leap of faith on our character. I'd like to think that helped, that it helped confirm to Erin that she did have friends she could count on.

Her strength of character did not change.  Erin has shown her bravery and her willingness to do whatever it takes to help a friend.

I'll link to some other friends who are more eloquent than I have been tonight.

I'll end with what Jennifer had to say:


You see, I have the advantage of looking like my image of myself. It’s me looking back from the mirror. When you see me, it’s me. Sure, it’s not everything. I’m sure you see the confident woman I am always striving to be. You see the brown eyes, the olive skin, the dark hair. The same olive skin and dark eyes that meant my elementary school best friend wasn’t allowed to come to my house because I was one of ‘those people’ to her mother. Her mother couldn’t see me. You all saw Erin long before you ever saw her face, and Erin is beautiful.  I am proud to stand by her side and call her my friend.


When I first started school I was considered a "slow child" and put in the special classes. The school administrators and all the "experts" thought I could not amount to anything.  Because I learned differently, because I seemed slow, it was assumed that I could not learn, that putting me in regular classes would be a waste of time. (I should note that I have a Master's Degree in Engineering, graduated with honors,  have been published in research journals,  have presented at conferences, and so on).

What you see in a person is not who they are. I got to know Erin, became her friend, then saw her face.

That's what people may be saying in a couple hundred years at the future equivalent of Renaissance Fests.

And finally,  what people would wear, if a hundred years from now folks went to some futuristic version of a Renaissance Fest type activity and the attendees were dressed up like us. (Picture it, someone in the future finds all the really awful tactical gear you somehow got and didn't use and will wear it because it LOOKS authentic.)
Future attendee:  "What are you?"
The Jack - "Hi, I'm a blogger!".


Why yes. I did quote myself, in a report on a blogmeet that I attended...  on Sunday.

She's getting it from both ends.  I'll let Erin introduce things.

I just got a panicked email from Squeaky, which I am sharing with her permission. She thinks it puts her in a bad light, like she's crazy and money-grubbing (I told her that "crazy and grubbing for money is MY job in all this, goddammit"). I think this is truly authentic fear and worry from someone with a life-threatening condition who has gotten shafted by bureaucratic incompetence.

More of the story at the link.

We've all been shafted by that, but (hopefully) not when our lives are on the line.   The donation site has been updated.

Anyway one of my European coworkers was grousing about the US's habit of backing out of funding international science projects midway through.

To which  Mr. A replied : "We're trying to teach you bums to stop accepting handouts."

Yes, because science funding is just like welfare. Well...   depending on if it's "science" or science.

And speaking of welfare...  When Welfare Pays Better than Work.

Good thing incentives only effect certain government projects.
Posted by The Jack at 8:17 PM No comments:

ATTN PA, Cali, and Other Gunnies.

So OFA is planning a bunch of rallies in Pennsylvanian.  Both to get more Reps to sign onto their gun control agenda AND to hassle those that have already taken a bite of the gun control apple.

Bitter has more, plus info on other locations the gun grabbers will be going.


And as for California... well the Antis have dropped their mask. After being confronted with the "Well what IS an Assault Weapon anyway?" They've decided to just ban all semi-auto rifles.

That Ruger 10/22 you have?  It don't matter what kind of stock you have, it's now totally banned.  Oh and they'll create an ammunition registry and background checks to by ammo.

Common sense!   Sebastian also muses on how post-Heller  the antis aren't going after pistols (remember when they wanted to ban all handguns?) but now they're going to try to ban rifles.

Ponder that, a handgun would be legal in Cali... but if you had the exact same gun but with a fixed stock and a 20 inch barrel it would suddenly be illegal.     Yeah.

Squeaky could use some more help

She's getting through some... interesting medical work.   Any support and help would be much appreciated.  On the upside while there's a lot of trouble, it does look fixable.

I'm not sure Erin needs the help but...

It can't hurt for Squeaky.

Erin came up with some amazing goals to help get Squeaky funded and then some.  (For reference full funding came in 36 hours)

I missed the boat on posting about this but funds are still coming in.  I guess those stretch goals are really enticing.