Tam was right: Yee's story does read like a Tarantino production of an Elmore Leonard novel

Wow,  seriously,  it's scary how it builds up.  There's drugs, guns, money laundering, paranoia, and more.

If you want to see how deep the hypocrisy hole goes for Yee  check out the FBI report on his alleged crimes. (The FBI better have this on tape).

That's coming from an man who in 2006 was named to the e Gun Violence Prevention Honor Roll by the Brady Campaign and has an A+ rating by this organization.

A man that wants to ban people from owning guns with detachable magazines.  A man that helped draft and enact a microstamping law.

A man who doesn't care what mobsters will do with the machineguns he sells 'em
Posted by The Jack at 6:46 PM No comments:

Know what the anti-gun movement thinks they need? Even LESS grassroots!

That's what Timothy Bal  advocates in a brief, but amazingly delusional NYT letter to the editor.

Weer'd points out that this is another example of the Antis not bothering to understand how the opposition (us)  thinks.  Basically Bal has a two-pronged approach.

1) A mass evacuation and boycott  of "decent" people from pro-gun states.

2) Have those same people raise money to pass gun control... in the places they just left.

Yeah...  instead of wanting people to be more active and actually be able to vote and personally advocate to accomplish what he wants,  Bal is instead telling people to turn tail and simply cut checks to Bloomberg.

Look,  I can get leaving a state because you can't stand its laws.
(I moved out of New York)

And I can get wanting to do something to "help" where you used to live.
(I'm a member of the New York State Rifle & Pistol Association)

But here's the thing,  I don't think moving out of New York positions me to be more effective at lobbying for New York gun rights.

But really Bal's argument is a concession that the gun grabber grassroots (such as it is) would do better concentrating their efforts...   holding ground in their home turf.

I commented on a post of Weerd's a couple days ago and he promoted it to a whole post.

So a couple of Leftists start looking down their nose poor people on welfare...

Let's begin with Tom regailing the group with a story from his day job:

Tom:  Obese woman with 6 kids comes in and spends 20 in foodstamps on 2 liters of soda and candy bars This job is so depressing sometimes.


Mr A: I'm looking for a silver lining there, but all I've come up with so far is "at least she wasn't a tweaker"


Tom: Yeah, but we do get those too. There's another woman. The state has taken two of her kids, and now she's pregnant with a third.


A third person (who thinks that maybe communism won't result in a piles of skulls either by incompetence or by malevolence if it's tried in Ireland)  is gobsmacked: "How can you spend 20 on 2 liters of coke and chocolate?: But is then apologetic going  "I suppose if it makes her feel good...."

Ah yes, because State aide is really just succor for the masses.

But what's fascinating is Mr. A and Tom reject that notion.

Miss Wolf asking the pertinent question: "I'm not sure how depressing that is. Six kids are going to go through a shitload of soda and candy bars."

She's right, what exactly is Tom's problem?  Divided among over a half a dozen people that isn't *that* much candy. Okay it's a lot of soda but maybe it's not going to be eaten all at once.

To borrow a phrase, who is Tom to judge?  What happened to her body her choice?  I mean it's not like she's spending his money...   Oh.

Ah!  He's depressed that all her kids are fat.

Tom answering Miss Wolf: : "And that's why her kids are all obese too"


My my, if Tom's not careful he'll start sounding like a conservative.  Course for Tom and Mr. A it wouldn't be the first time.

One wonders what "solution"  does Tom see?  Perhaps limiting what can be purchased with Food Stamps.  Making it so missuse results in their revocation?   Or are those reforms too heartless and icky?

Tom:  "Care to guess what the tweaker woman whose children were taken bought? Scratcher tickets. God I hate this job."

I can't say there's much with what Hilton Yam,  says here about the 1911 being out of date and for a carry piece not really worth the trouble.  Via Bayou Renaissance Man.

And I say this as someone who at this very moment has a 1911 strapped to his hip.  And who uses one as a carry gun.  As guns they can be fiddly, they'd have more feeding issues and things that you have to tweak and adjust on them.

Especially when you compare them to a modern design. (Doesn't even have to be polymer or double stack. As a wear game I prefer metal frame, and single stack can oft fit in the hand better for me, not to mention the slimmer profile helps for carry).


Same goes for the 45acp too. I shoot 45acp.  I like to shoot it.  I have a variety of guns that shoot it. I even reload it.  But... with modern defensive ammunition a 9mm Para will get you there just as well, and give you greater capacity.

If I was starting off "clean sheet" on firearms.  I'd might go with something in  Kahr in 9mm.   Have one that'd be fullsize and one pocket.  They'd have interchangeable magazines too.

(Glocks don't "point" naturally to me.  I could fix that with practice but personal taste and all.   M&Ps shoot just fine for me, but I'm not too keen on all the little fiddly parts.  Nor all the stuff you have to do to get the triggers "right".)

But, if you really like a 1911 by all means carry it.  But like any other gun put enough rounds through it before hand that you're comfortable with its reliability and function.

That said, you'll have better odds with a more modern design being reliable out of the box.  Now as to how it fits in the hand... well ergonomics are a deeply personal.

Really, I'm surprised that this is actually news.  But the 1911 does have a long hold.
Posted by The Jack at 10:47 PM No comments:

I did some work on the Desantis holster  for my PM45.

So let's see how it's worn. 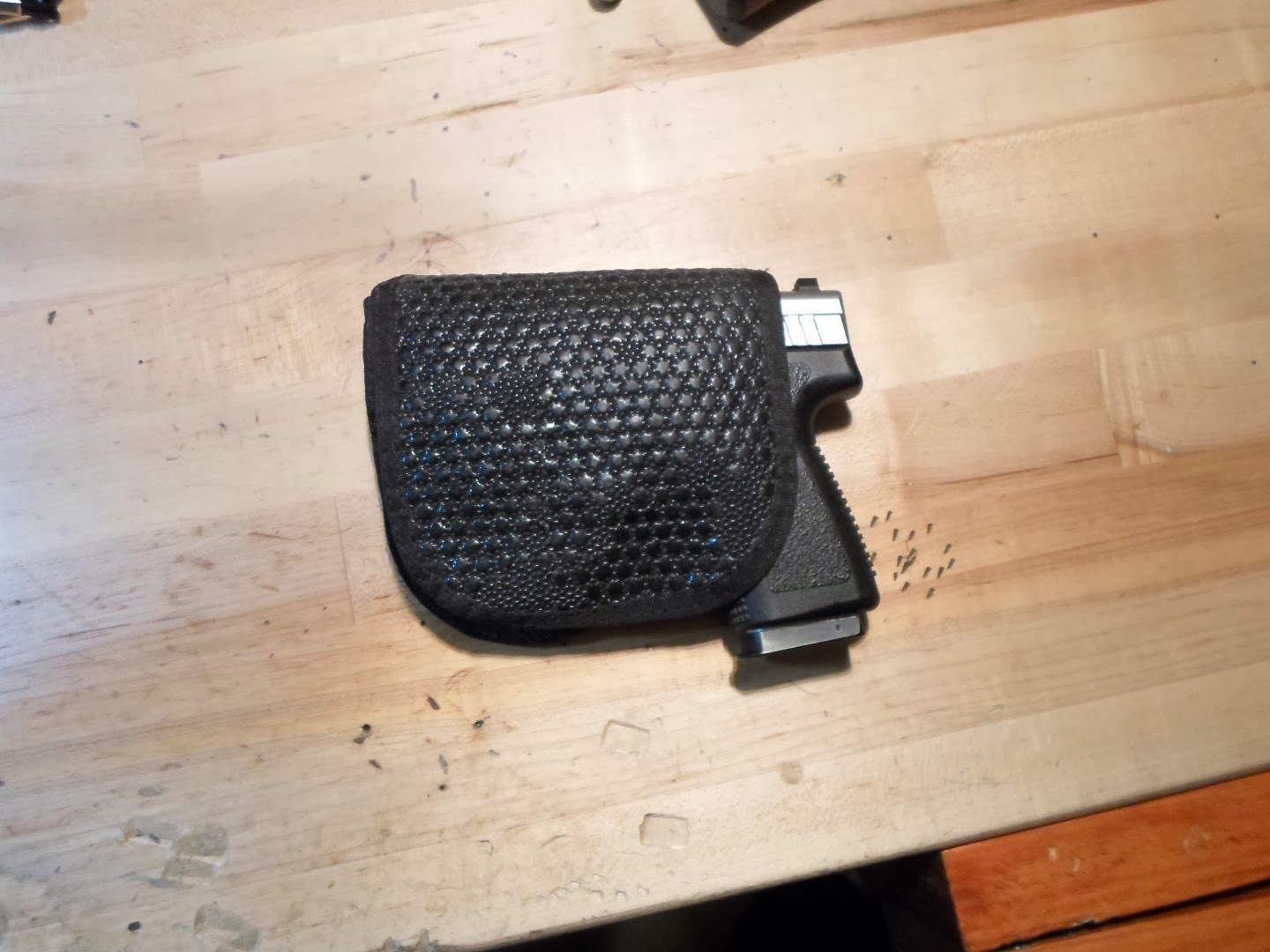 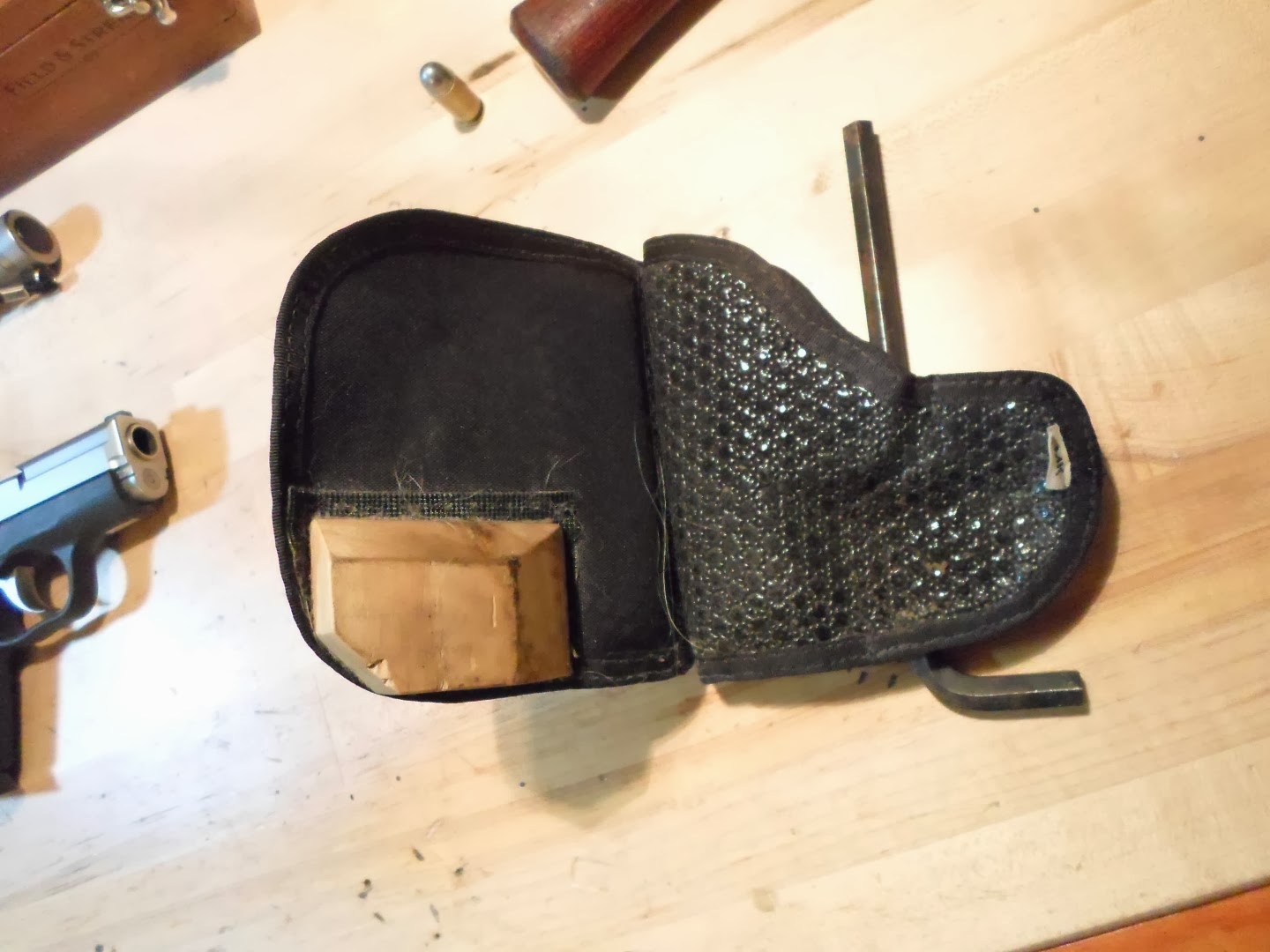 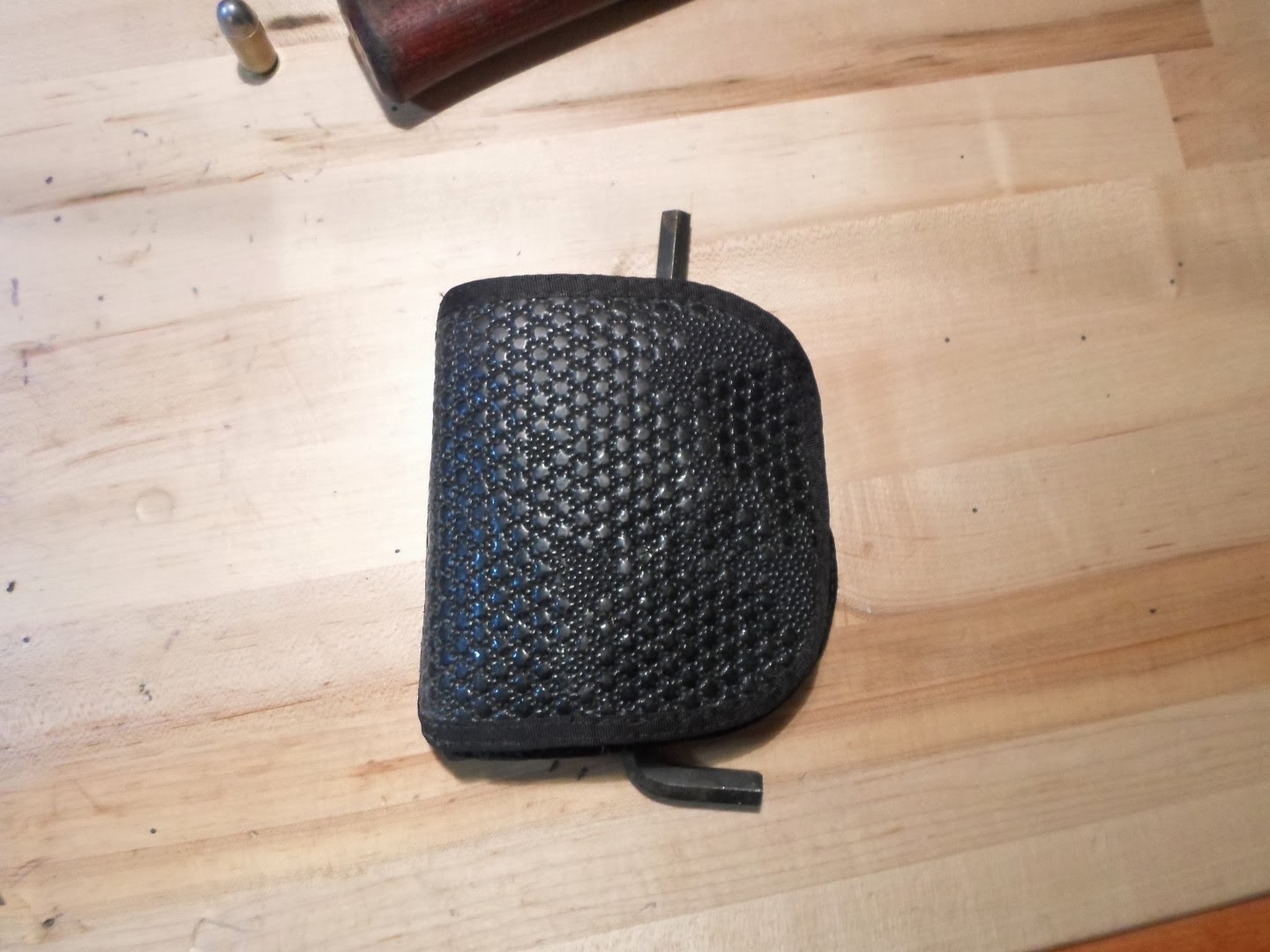 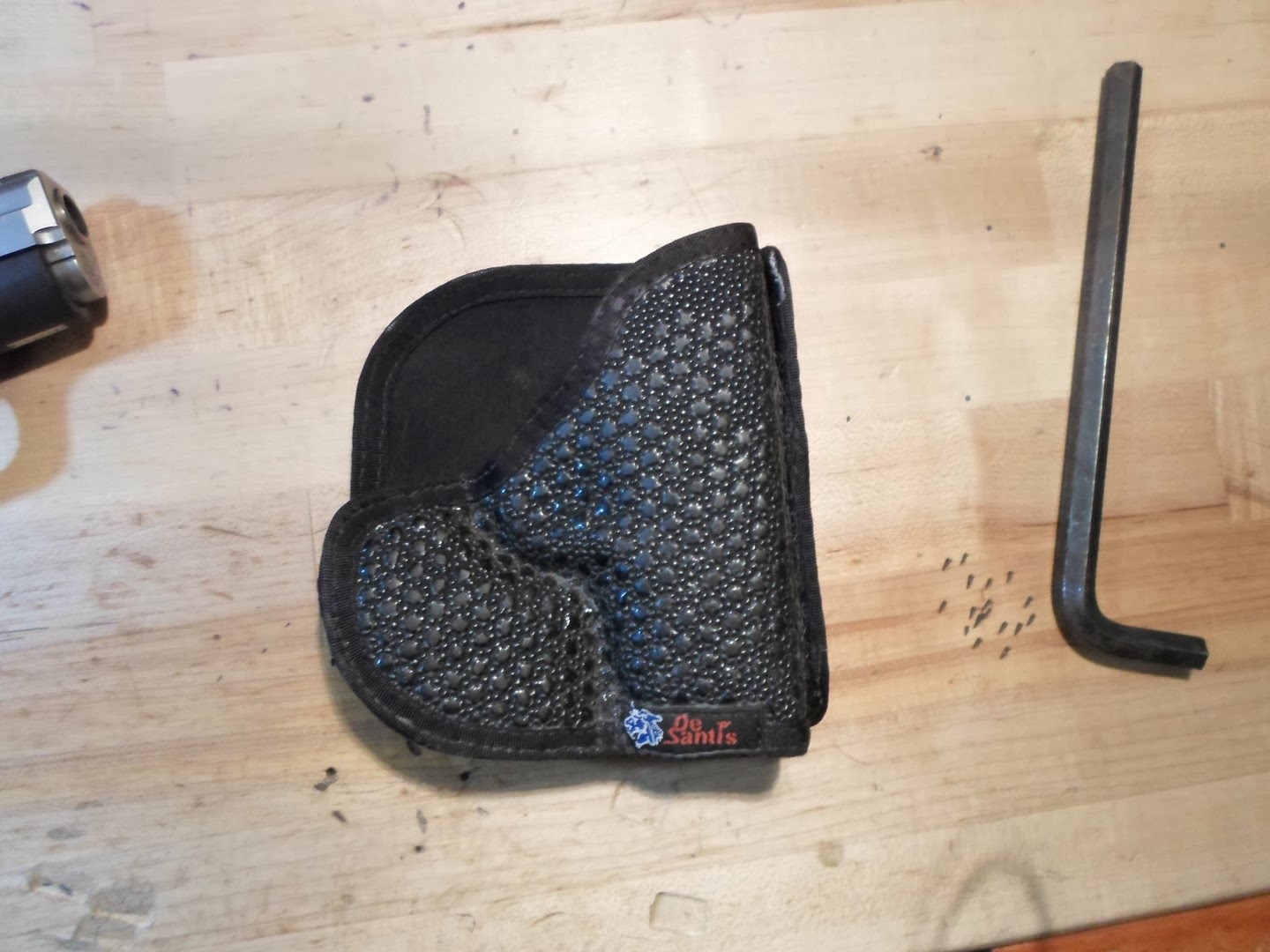 Looks like some dust and dirt.  A bit of black on the woodstain.  And some of the "tacky" sections coming off.    All in all not bad wear.

And it still draws good.   So I'll say it wore pretty well.


Also the Remora magazine holders for my PM45 are holding up quite nicely.

If you want a solid holster that will be made to spec, I'll happily recommend Michael's Custom Holsters
Posted by The Jack at 6:56 PM No comments: