BlogMeet and Merch and Handgonne Vids

Had a fun blogmeet at Yats.  Topics went from what happens when a bunch of your neighbors are also into armature radio, to the importance of red beans, to where to buy blinking "science!" lights, and a bunch of various and sundry that slip my mind at the moment.

And as promised I wore my Russian Origami shirt: 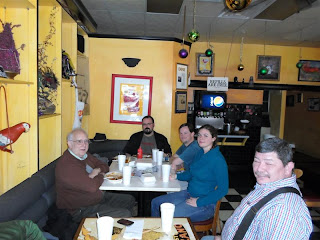 If you want one it can be ordered at the above link.

I'll put up Roberta's account when it gets posted. Edit:  And here's her report.

But first, as promised,  footage of the Handgonne in action.

Here's one of it with a better fireball.   And here's a closer look while a friend shoots it.

There's just something about a gun with no moving parts.   Also it's quite fun firing shot as well.  Also at the blogmeet was discussion that while the handgonne could be used for squirrel hunting,  deer hunting, as one of the smith's friends is thinking, seems right out the window.

Weerd: You wearing a suit at the range, Jack?

This tickles me because in that vid (and right now) I'm wearing Woolrich conceal carry pants,  a Dickies work shirt, workboots and one of Linoge's Russian Orgiami shirts (I bought two, you should too!).  All of which is pretty far from a suit.

Both shirts have good material and long tails, which makes handy for carry options.  The pants are nice having reinforced pockets,  extra pockets (without making you look like you have cargo shorts), and seams that have extra material that make doing repairs and adjustments a snap.
.
Weerd: Jack looks like you shop at the MIB store!

Hey! I  have some tan, dark blue, and brown clothes.  Even some dark green stuff!
Posted by The Jack at 6:52 PM