On my 1911 I had a case rupture with the chambered round. 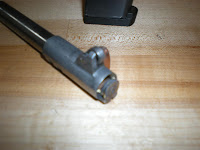 Edit: Sorry for the horrible quality on the photos. My camera sucks and I'm rather awful at taking photos.

That then detonated the next round in the magazine 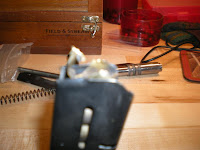 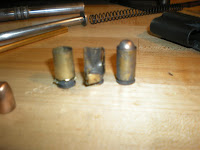 So I either overcharged it, the case was bad, or there was something else. The previous week I had a double fire that I thought was due to me not putting a primer in deep enough. And I did strip and check the gun.

Though now I'm wondering, as I inspected all the primers for today's shooting.

I also found this 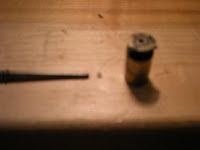 Or it blew off from the case that went boom and stuck to the pin. Note the hole on the primer of the ruptured case.

Very minimal damage to myself with some stippling to my cheek. So wear your damn glasses

The grips shattered. Slide looks okay, frame looks okay. I have to remove the bad case from the barrel. But I'll need to have it checked by someone who has an idea what's going on before I fire it again. I'll ask at the next blogmeet who is good to send it too.


I still have to do a full strip (of the lockwork) to see if I can spot anything obviously wrong.

I also have to take apart the remaining cartridges from the lot the kaboom came from to see what loadings they had.

I did a detail strip and found a few things that even I can tell are wrong.
1) The sear pin is bent. Visibly bent, bent to where it can't go back into the frame.
2) The firing pin block actuator is a little bit bent too.
3) Worst of all there's a frame crack. 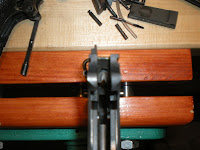 I couldn't get a good photo of the crack itself, but it's in the back of the frame where the disconnector and sear would rest. The web of metal between those parts and the magazine well.

The crack goes the full length up to the top platform.

So as Wally says: one firearm passes, another is born.
I've stripped her down and an now in the market for another 1911.
At least some of the parts are reusable. I'll definitely get the sights swapped out and put on my other 1911.

Update2: I've weighed out the powders from the remaining cartridges from that lot. And found a couple ones that were heavy by half a grain of powder. Which is very bad with a batch that nominally was brought up to the Lee do not exceed limit.

I can see that being a very likely factor. Maybe add in a case that had been shot too many times (I have been using range recoveries). And then an out of battery issue.

Added: The out of battery issue was the occasional (twice) and non repeatable double fire. Which could have been caused by that bit of extra primer metal atop the firing pin, if it was acting like an "open breach" firing pin, and struck the primer prematurely.

In total that's where I could have had a cartridge go off before the gun is in battery and not only would it be less supported but overly hot charged. Multiple bad things adding up to a big boom.

Added Monday: Here's another embarrassing thing that's so basic I just thought to check: Round count. Based on the notes I took and the storage bags I put the parts in there were 6 rounds in the magazine and one in the chamber. I loaded that magazine with 8 cartridges. And my memory is quite clear this happened on the first trigger pull.

Thus after the first bullet was fired, the brass was extracted, ejected, and the slide came forward, picked up the next round, and then as it put it into the firing chamber detonated it without me hitting the trigger. Scary. And more support to the failure stack and how you have to do a detailed check when something starts going strange.

So, stick with the starting throws, keep an eye on your powder measure consistency. And if you do any thing hot or weird with your loading measure every single case.

Wear your safety glasses. They're important and could save your eyes.

Inspect your ammo, especially if you reload. Check the casings and the powder loading.

Checking powder loadings goes double when you start to approach the do not exceed line.

Detail check your gun whenever something odd happens. A bit of debris may be in there or something may work.

Bring a medical kit. Even for minor injuries having something to clean up with, and a mirror to check yourself out are handy.

Use a logbook. If you reload keep log of every lot you made, when you made it, and any changes in your system. Been a big help on diagnosing this.

Have backups if you can. I have another 1911 that I can use as a carry piece until I get a replacement.

Not a fun way to end a range trip, but could have been worse.

Some final notes and a solution plan:


1) When running red/hot loads check the weight of every single load. In fact use the rig to load them a bit light and use a powder trickler to put to full charge

2) Be more careful on inspecting brass. Especially for high pressure needs. Get more new brass to use for such roles. This also means scrounging for range brass is not such a wise idea.

3) Even when you think you've solved a fault, still do a full detail strip. As there may be more than one failure at work.

Also it looks like the frame can be restored with the crack welded and put to use as a dedicated 22 long rifle gun. It's too compromised for higher pressures, but that's a way to get something out of this. I also have the parts for the conversion.

Also I'd like to thank everyone at GBC for their help on diagnosing this: Phssthpok, Wally C-90_Fl and anyone else I may have missed.
Posted by The Jack at 3:04 PM

Gun Writer Dean Grennell used to recommend the Pachmayr wraparound grips for 1911 owners who shoot handloads extensively, because Pachmayr molded the Hypalon rubber around steel inserts, and this gave substantially better protection to the hand than wooden or plastic grips. (I can't say if current Pachmayr grips are made in the same way, you'd have to check).

I don't have my reloading books handy, but would the highest charge of your powder exceed +P pressures?

But combine too much charge, possibly damaged regular P case, and out of battery detonation...

That'd do what I got.

Guns come and go. Glad you are not badly injured.

I try to use "fluffy" powders and leave some overhead on my loads so that I am not up to the charge limits for that load. First, a high volume powder makes a double charge much more obvious. Second, if I have loads that throw a little heavy by a half to a grain or so, and I don't notice it, then I'm still in the safe zone for load pressure.

As you said, a failure stack and it bit you. Could happen to me, you, or anyone, and again, glad you were not injured.

Remember the video awhile back of the guy demonstrating drawing from his holster, but who then shot himself in the leg?

He got a lot of flack for putting that up on youtube. Not just for violating The Rules, but for making himself and by extension, everybody else with a gun, look like a fool.

I thought he acted in accordance with the longstanding tradition among airplane pilots to investigate every single accident and publish the results. That relentless self examination has been crucial for making airtravel, both commercial and private, as astonishingly safe as it is.

Thanks for showing us how it's done.

G10 stocks are the way to go IMHO. Darn near bulletproof!

a 50% too much powder load possibly started the train of events by blowing a primer back and sticking it on the firing pin and holding it in the extended position that, as the bolt closed on the next round, caused the out of chamber bang that ended the sequence. Look for a spent shell with no primer.
And get a different powder measure/drop - the one you're using is either broken or otherwise not a good design. It just cost you a lot. Ditch it.

I had a similar ka-boom with a S&W model 39. I loaded a hot load for my Hi-Power and tried them in the 39. The case blew out down the loading ramp, cracked the grips & dented the top round in the magazine. I found two problems.

Second, while .38 cases typically show what I call a circular failure, 9mm & .45 cases fail inside the case near the case head. Cases loaded with hot loads should be closely inspected before reloading and discarded sooner than lighter loads.

"I thought he acted in accordance with the longstanding tradition among airplane pilots to investigate every single accident and publish the results. That relentless self examination has been crucial for making airtravel, both commercial and private, as astonishingly safe as it is."

100% agreement. I encountered a lot of that in the motorcycling and shooting communities. Understanding how mistakes are made helps to make them less common.

I do not think your scenario would work. During the loading cycle, the brass has to slide up the breechface, past the firing pin hole, to make it into the chamber. A protruding pin should catch on the top edge of the brass, jamming the action.

I tried this out some years ago, by locking the firing pin forward using the blocking pin of a Colt Series 80. The only way to get a slam fire with this setup is to hand drop a round into the chamber first.

I suspect the bent sear pin allowed the sear to release early, in a "hammer follow" fashion. Combined with a non-locked breach, due to debris perhaps, and you have your "kaboom".

Depends on how far forward the firing pin is stuck, else most old open-bolt subguns with fixed FP's wouldn't work.

Tam:
Yeah, I considered that point. Problem is with the 1911, the feeding cycle is designed to slide the rim under the extractor hook. My impression is that any protrusion sufficient to ignite the primer would catch the rim. Would be interesting to make an adjustable firing pin positioner to determine how much the brass could bounce over and if that would still cause ignition. Maybe a future project...

I haven't had the chance to study the internals of open bolt guns. Most of my trigger time on FA weapons has been closed bolt. However, it is my impression that the feed cycle consists of the edge of the bolt smacking/bouncing the cartridge out of the mag, with the extractor(s) snapping over the rim as it actually fires. I doubt any of them utilize controlled feeding as the 1911 does. Just thinking of a bolt pushing/holding the cartridge with the firing pin against the primer makes me nervous!

I beleive you may want to get rid of that reciever/frame since it now (in the eyes of (the ATF) is a class III firearm.......